Yes, like a lot of you, my backyard was my footy ground as a kid. Poorly placed lemon trees, clothes lines and vegie gardens became obstacles to overcome, much like an opponent, although luckily we grew up on a rather big property in leafy Blackburn. 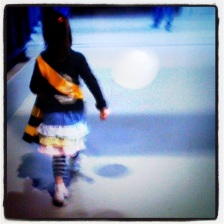 Here I am in front of the newly erected pavillion (1986)…surely one of the last wooden structures before the modern obsession with concrete and steel. The Tiger jumper you see there now fits my own daughter, although she’d like to morph my Dale Weightman’s ‘3’ into an ‘8, like Jackie.’

I loved playing footy in the backyard as a kid. I would act out each upcoming match, concocting the most bizarre of circumstances! Richmond, 23 goals in the first quarter against Essendon! Or trailing Carlton by a hundred points, the Tiges would come back and snatch it with a miracle goal after the siren! I did commentate a little to myself, but I was more into mimicking the crowd noise as the Tiges came storming back! The glory was never reflected come the weekend, but I’d be back the next week, dreaming up glorious scenarios for my Richmond.

It was often said to me as a kid that the muddier you got, the better you had played. I must have been a bit of a star then! Yep, that’s my sister Mezz and I. Mum did the unthinkable and tried to convert her to Essendon, but she had the sense to follow the family team, and the sash was soon a yellow one. I enjoyed playing footy with my lil’ sister, and I had her kicking really well, but her heart just wasn’t into playing. I had a dream to play for Richmond. That was sadly not a reality for her so why bother? What I needed was a mind for moulding. Thankfully, my footy mad baby brother came along.

Inexplicably, though he’s wearing yellow and black here, he grew up a Footscray supporter. He does have a soft spot for the Tiges however, as I do for the ‘Scray, but going to Footscray v Richmond matches is a big no-no!

Far too old to get away with it, but that didn’t stop us!

There was a six year gap between us, but I wasn’t your typical ‘beat-up on you little brother’ type. I preferred an even competition, so would introduce handicaps for myself. I’d have to start on my knees, only kick on my left and the like, all the time searching for some semblance of realism. The backyard was my own league ground, and I tried to play it to scale. This meant kicking shorter, running slower…all in the search for reality. A visitor would come over, boot it over the fence, and essentially ruin our game.

But my brother grew up. Pete now stands half a head above me. In my latter years at home, we were able to compete without handicaps…it was man verses man….ok…. boy verses nearly man. We had two main games. For one of them we’d stand 20 meters apart, one of us would kick the ball high into the middle and we essentially played a version of chicken. After a sore head or two however, we resorted to the game you can see in the surrounding pictures.

Shoulder to shoulder, one of us would kick the ball high into the air, avoiding the pine tree. If you had scored, the other person kicked it ‘up.’ If you marked the ball, you had a set shot. If it came to ground however, it was on for young and old. He was young, I was old. Numerous winter hours were spent here, playing until dark. We’d bump, swear, tackle and rub it in the face of the other. All still within the framework of playing ‘to scale’ in our backyard though. We knew we’d never ‘make it.’ This was it for us!

Three things about this photo. Firstly, I cannot work out if I am wearing long shorts or short longs, but they do lend a certain early 1900’s knickerbocker feel to the photo. Secondly, it’s clearly a staged photo as can be seen by the limp ‘effort’ i am putting in. Our game was not so much about high flying either, rather marking ‘tussles.’ And thridly, it reminds me of finals time. Spring leaping through the trees and the smell of cut grass. I can smell this photograph.

There’s something about us older brothers. Though Pete is well taller than me, I can still outmark him through sheer competitiveness. I imagine league players, with older brothers who never made the highest level, still unable to defeat their older siblings in backyard footy. It’s a different beast. Visualise Jason and Cameron Cloke dominating and making Travis, clearly the pick of the trio, cry in the backyard. David would be umpiring of course. He never misses a match.

So whilst footy can sometimes be the only thing that ties siblings or parents together, that wasn’t the case with us. We had plenty in common and still do. But the footy is never far from being brought up. On both of our wedding days we even pulled out the footy, ironically in the backyard, to help settle the nerves. It’s something our respective partners are still coming to terms with!

Playing footy in mum and dads backyard is not as easy as it used to be.There’s a new vegie garden on the half forward flank, and though the clothesline has been removed (about time!) the goal posts have since disappeared. There’s more breakable stuff around too…while the golden elm encroaches onto the playing field like never before. But we can still navigate our way past the cubby house, blind turn the bird bath and nail the goal from the clothesline pocket, all with our eyes shut! 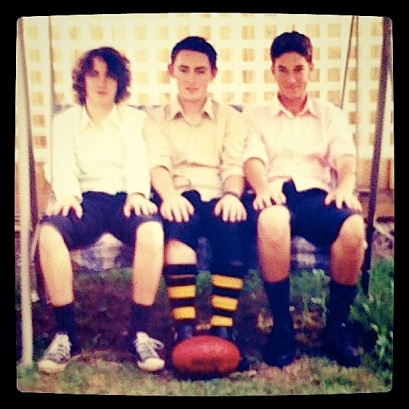