Melbourne’s football grounds tend to reflect the suburb in which they are found. As I’ve already shown you, Glenferrie Oval, in the leafy, well to do suburb of Hawthorn boasted an art-deco stand, while Fitzroy, Melbourne’s first suburb, with somewhat a bohemian past boasted two elegant pavilions, one of which still stands.

North Melbourne’s Arden Street oval on the other hand mirrors it’s working class roots. Much like Footscray’s Western Oval and Collingwood’s Victoria Park, Arden Street was a no-frills football ground with plenty of concrete and grit. It was practical, yet still charming in it’s simplicity.

To demonstrate Arden Street’s lack of outstanding features, it was an object separate to the ground itself which is still remembered as it’s most endearing feature; a gigantic gasometer which towered over the outer wing. 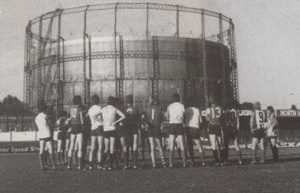 The gasometer however is long gone, the humble little ground outlasting it’s neighbour. The old stand has made way for North Melbourne’s new training facility, with very little remaining to suggest league football was played at this ground. A few years back I made a few trips to Arden Street, and was able to capture the decaying ruins of a league venue. Being too young to have ever attended or been aware of a match at Arden St, it was with some level of mystery that I ventured to North Melbourne’s spiritual home. Here’s how the ground stood just 5 years ago.

Firstly the old stand, what I would term a very ‘northern suburbs’ pavillion, much the same design as Carlton’s late Heatley Stand and what’s left of Coburg’s grandstand. Incidentally, North used Coburg City Oval as it’s home ground for season 1965, yet returned home the following year.

With the old grandstand still standing proud, though blocked off from the public, this is Arden Street looking much as it had as a league venue, complete with the old undercover betting ring behind the old stand which was in place for the greyhound races that used to grace the ground. It was destroyed by fire in 2006, though its days were numbered.

This is a snap taken through the old social club-come-gymnasium window. North Melbourne produced some amazing results in the 1990’s considering their facilities. As North players said throughout their successful era, the “weights are just as heavy as West Coast’s.”

North was renowned for playing hard both on and off the field, yet surely the gymnasium in the bar was taking it a step too far!

As you can see below, the old grandstand was in a state of decay, and though I never like to see a grandstand demolished, what’s more important to me is that North Melbourne is still based at Arden Street Oval. Bulldozing the existing facilities and building up to date ones were the only way that North could stay in it’s own suburb. In a nice touch however, many of the old bricks were used in the new structure.

A feature of the ground which I loved was the old entrance next to the social club. It looks to me as though this was one of the last additions to Arden Street as a league venue, coming across as very ’70’s. And what I love here is the glimpse it gives us into 1985, the last year Arden Street was used as a league venue:

Ah…the magic of entering the ground and heading up the stairs to be confronted by the vast field is displayed beautifully here, a feature at many old league and association grounds, and football grounds the world over.

The old players race is about the last remaining feature from days past, other than the oval itself and the grassy contours which once stood as gravelly terraces. The scoreboard and covered shelter areas are long gone and the ground itself has been opened to the public. The seating along the boundary fence also remains, and you can see by the below photo what I meant when I said that Arden Street was a ‘no-frills’ affair. 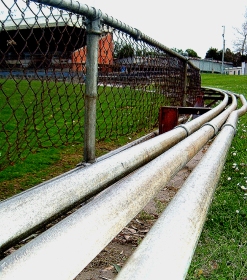 As I’ve already mentioned, little is left of the outer other than the grassy hills which have replaced the concrete wonderland, so I was surprised to find this little gem which has survived the passages of time. The old ‘Dry Area’ sign still remains at the top of the hill on the outer side, and I had to remove a small branch or two to make the sign visible. The standing room ‘sheds’ that stood on the wing and behind the goals were demolished after the Bradford City fire in England, deemed a fire hazard.

Lastly, I’ll leave you with the words of football great Ron Barassi. This is one of Ron’s quarter time speeches as coach of North Melbourne in the centre of Arden Street oval during the late 1970’s. Let’s just say that Ron did not hold back for the camera! As Ron rants, make sure you take in the footage of old Arden Street as a league venue, the life and colour that once adorned the old ground. Next time you drive past Arden Street, Victoria Park or Windy Hill, it’s worth remembering the contribution they made to football in Victoria. We outgrew them, but they shouldn’t be forgotten.

For more on Arden Street, in particular the scoreboard, check out scoreboard pressure

With a little help from my friends…