I’ve always been interested in the Essendon story. In the late 19th and early 20th century, a time in football of fierce suburban rivalries and territorial battles, the Essendon Football Club oddly called the East Melbourne Cricket Ground in Jolimont home, a two and a half hour, 10 km walk from Essendon. How peculiar that while we often now mourn the loss of locality and sense of place in football, Essendon played so far from home all through their formative years, from 1881 until 1921!

Due to the East Melbourne ground’s closure in 1921, the Essendon footy club finally came home to Essendon and did what most league clubs have done in some way shape or form…bullied a VFA club! Yes, they took the Essendon Recreation Reserve from VFA side Essendon Town who, groundless, ceased to exist, swallowed up by VFA team North Melbourne. And there the Bombers stayed for 70 years until progress saw this club move back to it’s traditional area, the MCG!

This post is a continuation of a series I’ve been compiling over the past few years that I’ve called Home and Away. In the early 2000s I began documenting with my camera Melbourne’s decaying old league grounds, however Essendon’s is a ground I didn’t explore fully until more recently. I did however manage a few encounters with the old ground.

Mum is an Essendon supporter so I do sometimes stop and think what might have been. Here are some photos she took from I believe a 1975 game between Essendon, in red shorts, and St.Kilda. Mum’s work colleague Colin Carter lined up for the Saints that day which is why the camera was on hand. Below is a mash up panorama of the photos which shows policeman on the ground, during the match, as the Essendon team runs out!

My first memory of Windy Hill is watching the 1988 VFA grand final on the telly and being rather confused as to who Coburg and Williamstown actually were; I thought it was Essendon and Richmond on the telly! I never saw a league game at Windy Hill however I was lucky enough to attend the Richmond v Carlton legends match in 1990, a fundraiser for the Save Our Skins campaign. With the crowd figure nearing 25,000, it felt real to me!

We sat on the members wing in a poky little seating bay, right in front of where the Windy Hill brawl took place! I didn’t appreciate it at the time but on reflection am thrilled to have watched Hart, Bourke, Bartlett, and Barrott in a game of footy, even Bull Richardson had a run. I also saw Syd Jackson, Vinnie Catoggio and Percy Jones play, and of course Barassi. Though he was beyond past it, I can say I saw him all the same. David Cloke played that day too, and in what must be a first, came out of retirement and played league footy the following year!

Richmond took Essendon’s good will in letting them use the ground and ran with it, signing off from Windy Hill with a surprise win the following season. David Cloke played in this game also.0 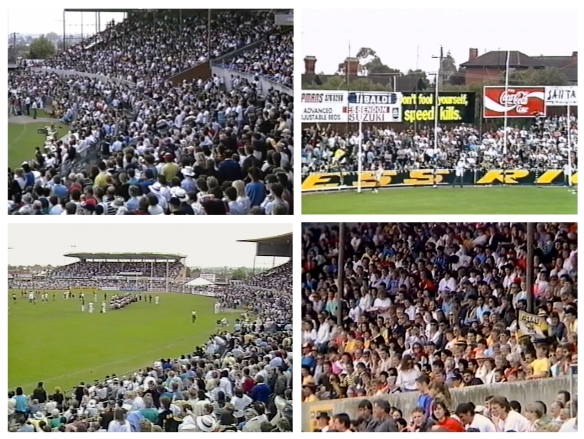 The other time I got out to Windy Hill was to see an Essendon FC side of 6 take on an Australian VI in a cricket match played before a very decent crowd. I of course had no interest in the game but was along to see and capture Windy Hill with a crowd, bravely wearing my Richmond polo. It was great to see the winning raffle ticket number being shown to the crowd and in the middle of summer, that footy in the middle of the ground was a sight for sore eyes.

The ‘working class stands’ at Windy Hill making use of themselves once more, albeit for a cricket match

In the past few years, particularly living out this side of town these days, I’ve made a number of visits to Windy Hill for a snoop around with my camera. Thankfully I got some shots of the beautiful old Showers stand before it was criminally knocked down in 2007. Interestingly, built in 1939, it was the last major grandstand built in Melbourne before world war two. Whilst not quite as elegant as the art deco grandstand at Glenferrie Oval, I find it difficult to reconcile that it is gone and the concrete jungle on the wing still stands. That’s progress for you I guess!

A mash up of Coleman taking a big grab in front of the summer cricket crowd from a few years back. Click the photo to make it bigger

The Showers stand had a lovely shape to it and was made predominately using blonde brick. I loved finding this old Tavern Bar and Snacks sign which I’m sure has since been thrown into a skip. What I didn’t capture was how this stand looked from the street. It really set the tone for how I perceived Windy Hill and I’m sad that it’s gone.

In front of the Showers stand on the terraces (now a grassy hill) sat these two turnstiles. I’ve seen them in a few different spots on my journeys to Windy Hill so I get the idea that they want to hang onto them but are unsure how best to display them. I’ll take one!

Another visit, another position for the turnstiles. I saw this magnificent old boot studding table the last time I visited, at least I assume that’s what it is. When I look at the nailed on cigarette tin I am transported to a different time, to dingy changeroom of any football club in Australia. Again I’m not sure what the plan is here, but hopefully Essendon see fit to place it in a museum or donate it to someone who will! 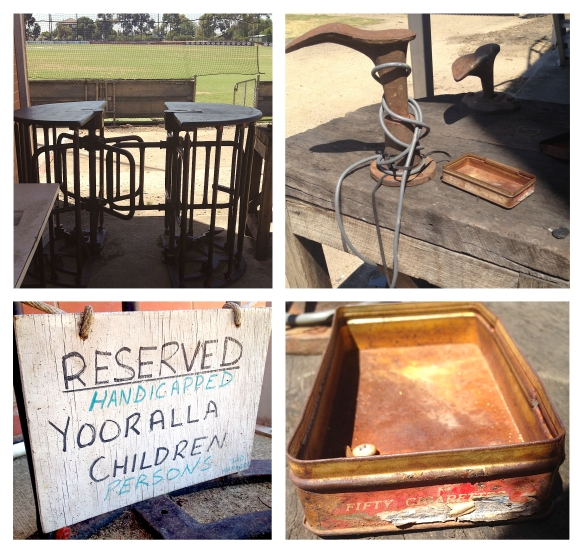 Down at the primary school end of the ground lies one of the makeshift scoreboards that was in use for a time during the 2000s for VFL matches. The main scoreboard was demolished with most of the outer after the ground stopped being used in the early 1990s. To read and see more about the old scoreboard, see Scoreboard Pressure’s great post on it HERE. 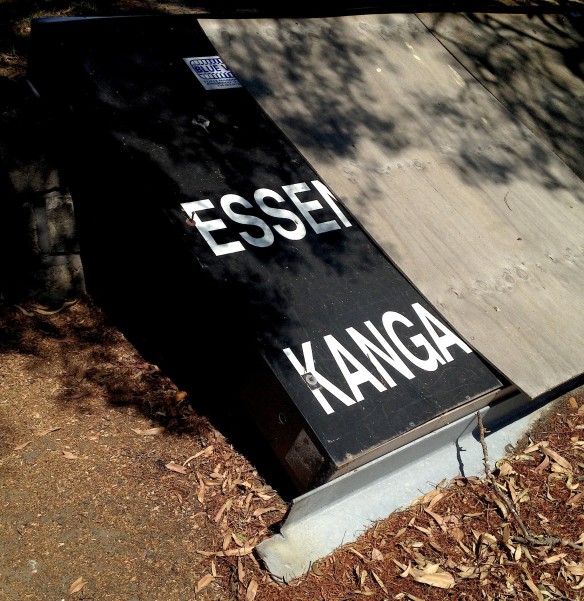 Now this is one of my favourite parts of Windy Hill, walking through the bowels of the grandstand, the light of the playing arena beckoning you onwards. That’s what I love in old footy grounds, the contrast.

Much of Windy Hill has been demolished however what has endured is a very solid collection of grandstands from the 1960’s and 1970’s, serving as a time capsule of sorts. They’re not pretty and there are no frills however that’s what footy used to be. Generally footy grounds reflect their area, and Essendon had a mix of one ‘fancy stand’ and three ‘working class’ stands. That sounds about right to me. Again it’s the nooks and crannies that I love. Footy grounds used to evolve. Now they come pre-fabricated. 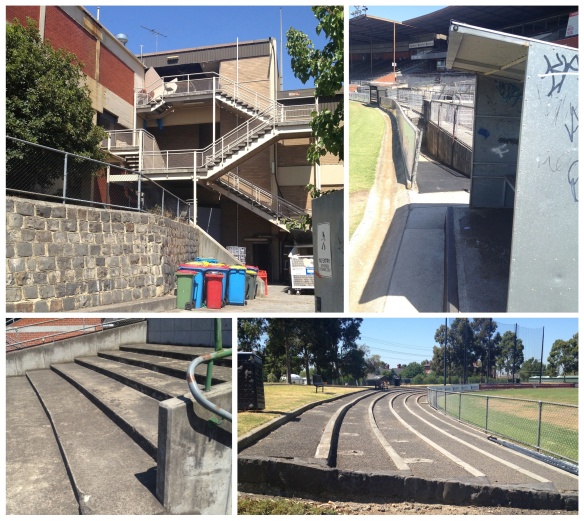 I love coming across something interesting that you hadn’t picked up before. The photo on the left below is the back of the R.S Reynolds stand, a stand which I understood replaced the old stand on the right. But it dawned on me that the brickwork looked far too old for the 1970s stand that now stands there. Looking at the photo on the right, there seems to be a consistancy with the the grey band of concrete across the mid-section of the two stands, but the more I looked, the stands just appeared completely different. 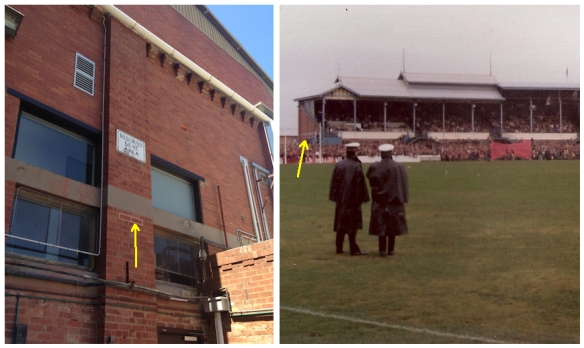 I consulted many books and websites which all spoke of the Reynolds stand in a continuous fashion as if nothing had happened during the 1970s. So I made the assumption that the shell of the brickwork must have been retained to save costs and the new stand built over it. Finally I had this more of less confirmed in the book Flying High, a history of the Essendon Football Club.

“During 1976, the R.S Reynolds Grandstand renovations were completed at a cost of three hundred and thirty-one thousand dollars. The top of the stand had been renewed and extended.”

I know we often joke about the Essendon bowls club effectively standing it’s ground and forcing the Bombers to leave their traditional home, but I for one wish they’d been able to stay. Whilst it took Essendon a good 40 years to make it’s way back to playing in Essendon, Windy Hill will always be the club’s spiritual home. Thankfully the Essendon VFL team still uses the ground as it’s home, and I hope they continue to do so although the language used around this topic has been rather uncommitted.

I love a good ‘hotch-potch’ of grandstands. These have a very Waverley Park/Moorabbin feel to them; wonderfully bleak.

In a way things have come full circle. There’s again an Essendon team wearing red and black (as the VFA side did) playing at Windy Hill in the old VFA (now VFL) and the league team plays home games closer to the city. I propose that the Bombers VFL side call themselves Essendon Town or the Dreadnoughts (Essendon Town’s moniker) to bury the hatchet all these years later. Would be a nice, quirky touch.

Finally, I took this still from the 1990 Richmond v Carlton legends game at Windy Hill as I believe, and I’m happy to be proven wrong, that this is the last time we ever saw those magnificent banners around the boundary fence. They have the new LED advertising displays well and truly covered in my book, but any digital club people reading this could do well to replicate these digitally before a match. It wouldn’t be the same but would be a nice touch.

I never experienced an Essendon game at Windy Hill but this is the ground through my eyes. I’d love to see and hear your photos and memories of one of league football’s most notorious venues.