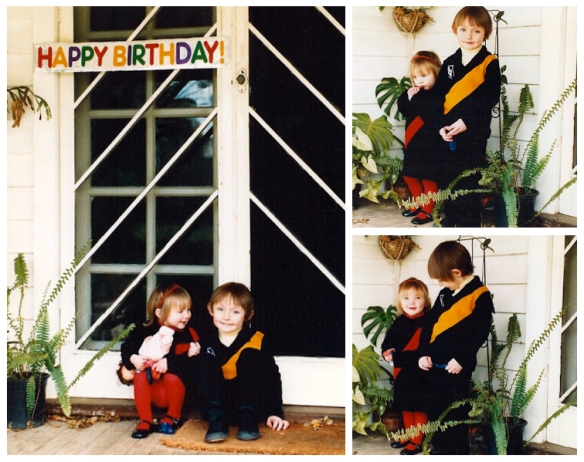 1986, my 5th birthday. sister maryanne was still being ‘Essendon-ed’ by my mum, but this was futile. She was a Tiger soon enough.

The year was 1986. I’d just been to my very first league match. It was a Richmond v North Melbourne Friday night match under lights at the MCG. Richmond had beaten the Roos. I have some vague memories of meeting dad at work in the city with mum, catching the tram to the ground and sitting in the old southern stand. I remember the sheer size of the MCG, the excitement of the lights as we approached the ground. I remember being cold. I remember being glued to the match.

The above photo was taken three weeks later as I celebrated my 5th birthday. Little did I know I’d just begun a complicated journey with my dad’s team, Richmond, who just six years earlier had held aloft the premiership cup. I saw Maurice Rioli play that night, so the record books tell me.

Little did I know the emotional pain following Richmond would bring to my life. The embarrassment at school, the anger at matches, the hollow feeling of being overrun in a final quarter, time and time again. Losing the unlosable and failing whenever it really matters.

But I wouldn’t change a thing. Following Richmond has been difficult, a real test of character. Yet I’m thankful to barrack for the club and suburb that my family both followed and lived in. I’m thankful for hearing the story my dad told me tonight, that his dad, my pa, would come home from games in the late 1950’s and early 1960’s saying “Well it wasn’t Ron Branton’s fault we lost!” I could say the same of Daniel Jackson today.

Some of the best memories growing up were of rare Tiger wins, ringing nana and pa and asking them to record the replay. I’d watch it the following Friday night when we’d go over for dinner.

Stick with them Tiger fans. Just think what some Fitzroy fans would give to still be able to go and watch their team each week, whatever the result.

As I left the ground on Saturday with Richie and Mol (the eldest isn’t into footy), the three of us clad in knitted Richmond jumpers, a punter tapped me on the shoulder and with a glint in his eye and suggested it was child abuse that I put my kids through following Richmond. Yes, I’ve heard that one before. I didn’t bother telling him that one of them had ‘Richmond’ on their birth certificate! I did however reveal my birth year…1981. He chuckled and wished me the best, much like a drunk uncle would on Christmas day.

Left:On our way to the footy. ‘Richmond’ is wearing the same jumper I’m wearing in the first pic.
Right: What have I done!! Poor Mol learning that the footy is not all fun and games

I love the Richmond Football Club.