As former partners Coburg and Richmond clash today in round one of the VFL, let’s take a look back at the second time these two great clubs met, back in the final round of season 2000.

To set the scene, this was the first year of the restructured VFL which was made up of VFA teams, AFL reserve teams and some VFL/AFL alignments. Coburg was actually sponsored by the Fitzroy Football Club and as such became the Coburg-Fitzroy Lions, a move which made sense as this was the emblem for both clubs. The team wore it’s Coburg jumper against old VFA teams and a Fitzroy jumper against AFL reserve sides. Upwards of 3,000 old Fitzroy supporters swelled Coburg’s attendances each week and the arrangement seemed to be kicking goals.

Final round of 2000: The crowd was big and tense

But Coburg were broke. Entering the final round match against Richmond there was great uncertainty in the air. This was a very difficult time for both Coburg and Fitzroy people, bearing in mind that Roy fans had already lost their team just 4 years prior. Was this to be the last time a Coburg and or a Fitzroy side graced the Melbourne playing grounds?

As such there was great feeling at the City Oval that day. Though both teams were well out of contention there was a real finals atmosphere with just on 4,000 there to see the game. Coburg-Fitzroy as it turns out were never going to lose the game. It could well have been their last and they planned to enjoy it.

Aaron James lining up at full forward for Richmond

I can’t remember a single passage of play from the day, who played well or who stunk, but football is deeper than that stuff sometimes because I very much remember the feeling of being there; a Richmond supporter hoping that Richmond would lose. It sounds awful I understand, but I don’t follow the Tiges in the VFA-VFL comp.

As the siren rang there was a great outpouring from Lion fans of all persuasions. Richmond fans, who didn’t care about the result, just went on with their kick-to-kicks, un-disturbed by defeat. The Coburg-Fitzroy boys however knew this might be their last hurrah, and the players congregated in front of the fans on the hill and together they belted out the Coburg song. 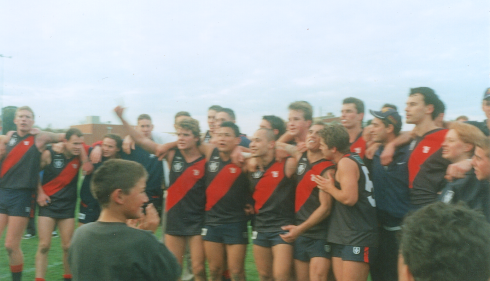 Above: The players belt out the song in front of the hill, pictured below 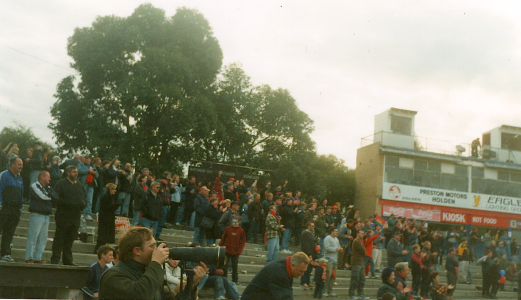 I still vividly remember leaving the ground with a flurry of supporters, and a bloke in a Fitzroy scarf responded to someone’s jubilation with ‘I just hope we have a fuckin’ side next year mate.’ There was very real concern on his face. Turns out they didn’t.

It’s funny how things work out. I kept a close ear to the ground over the coming weeks to see what would become of Coburg-Fitzroy. Impatiently, I decided to phone the club and ask for myself. When the phone was answered with ‘Hi this is the Coburg Tigers football club’ I had to do a double take. Tigers? Had the person on the line suffered big-cat forgetfulness? 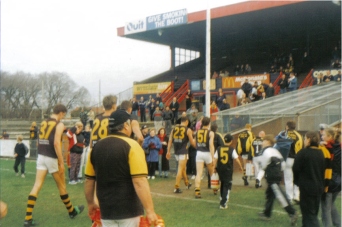 No. It turned out that Richmond, whom it seemed may have been Coburg’s final opponents, had stepped in as some sort of white knight and ‘saved’ the club. The catch was, they were no longer the Lions. Whilst I was happy that the club was saved, I was very disappointed in my own club insisting upon the name Tigers. The colours remained red and blue and the Tiger made no sense at all. There was also anther bunch of Tigers kicking the footy around down at Werribee. And the Fitzroy fans? Would they have stayed on board it the name Lions remained? Hard to tell, but what a loss again for the loyal Roys.

There’s an odd symmetry with today’s games. Richmond plays the VFL and AFL Lions, both having had an affiliation with Fitzroy, obviously Brisbane’s is ongoing! I now hold a membership for both Richmond in the AFL and Coburg in the VFL, and as such will be wanting for a Burger win with no Richmond injuries!

And what would Coburg-Fitzroy look like now if they had been able to continue. We’ll never know sadly, but it all came down to money I guess. At least we have the name Lions back in the old VFA. And who knows, hopefully one or two old Roy boys pop down for a look.

The universal reflex reaction to victory, hands in the air followed by clapping.

This photo was from a gorgeous Saturday afternoon spent at the footy back in the mid-2000’s, and marked the last time I would sit in the old Olympic/Northern Stand at the MCG. The occasion was Footscray v St.Kilda, and I took my Dog supporting brother, Pete. We sat in the middle deck on wooden seats. Come to think of it, this is the last AFL match I watched with the risk a slpintered bum. It was also the last time that I could sit and watch league football in Melbourne and see trees, something I miss greatly.

Today we find the Dogs again on one of their exciting excursions to the MCG to play Richmond, a day that me and my Footscray supporting brother never relish. The last Richmond v Footscray match for points we went to together was the game at Docklands when Richmond snatched a draw from the jaws of victory, and Nathan Brown greeted the siren with arms raised. We are both rather fond of one another’s team, yet we are fiercely competitive…it’s just not a good mix. The Liberatore/Knights incident threatened to tear us apart!

Whatever the result, football will always be the winner when the MCG is graced on a Saturday afternoon. Long may it continue to do so.