Senior league football returns to Richmond Paddock today in what will be the final dress rehearsal for the Essendon and Richmond football sides for season 2014. A total capacity of 2,100 will however rank as one of the lowest Punt Road crowds of all time, a far cry from the 46,000 whoe squeezed in to see the 1949 clash between the Tigers and the Blues. 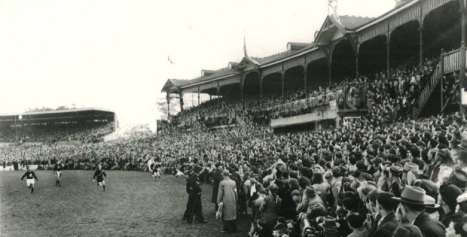 But I don’t wish to dwell on present events. This post is going to look back at the old Punt Road oval, often through the lens of my own families eye. As all of my home and away posts have aimed to do, this is to showcase essentially what has survived from yesteryear…an old sign here, and grandstand there, a ticket booth somewhere else.

We’ll start back in 1966, and much like today, the theme is pre-season. Dad ventured to Punt Road Oval, camera in hand, for an intraclub practise match. The reason he attended? To see new recruit Royce Hart who’d received rave reviews upon his arrival from Tasmania.

These shots were taken from the Cricketers Stand, a place where dad had never watched the footy from, hence the fascination. Similar I guess to when I’d sit on the members wing or even the super boxes at VFL Park for practise matches. These photos offer a great view of the Punt Road end of the ground, the Royal Hotel and the classic Richmond skyline, dominated by the St.Ignatious spire.

The outer hill remains largely intact today, although at the Punt Road (the actual road) end it suddenly narrows. This was due to the widening and adding of lanes to Punt Rd, one of many factors contributing to the Tigers leaving the ground for the near-by MCG in 1965.

On the right is a very interesting photo, taken again from the cricketers stand. Visible is the outer side scoreboard and if you look closely you can see the old concrete fence which once surrounded the oval. There’s also the overgrown terraces behind the goals, which are no longer. The outer side however is still very recognisable today.

Some more fossicking around recently led dad to stumble across some old slides. See dad is Richmond through and through (and through) but also followed Prahran in the old VFA competition. And so it was the dad journeyed to what was familiar territory (the Richmond ground) to see them take on Preston in the 1968 VFA grand final. (The 1967 final between Port and Dandenong also at Punt Road is widely regarded as one of the more brutal football games there has been.)

Again dad seemed attracted to the Cricketers stand, and is himself suprised that he’s taken this photo from inside the arena as the ‘two-blues’ entered the field of battle. Punt Road had hosted it’s last VFL match just 4 years prior, so the ground was still ‘complete’ and able to cope with a large crowd.

The second slide dad uncovered is of the Liston Trophy being presented to Preston player Dick Telford, who after stints at Collingwood and Fitzroy took the VFA competition by storm, also winning his club best and fairest and helping guide Preston to the premiership. Also number 1 for Prahran you can see is former well known Collingwood player Kevin Rose, who captain-coached the two-blues at the time. Also note the wonderful banners adorning the boundary fence, although they have a rather Coburg/Port Melbourne feel to them, perhaps from the curtain raiser? 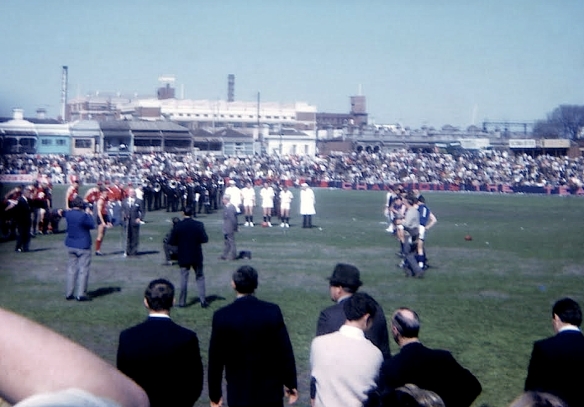 Other things I love from this photo are the brass band mid ground, the ‘stuffy and important’ looking men along with the late 60’s Richmond in the background.

Now my first visit to Punt Road was for the 1989 Richmond best and fairest barbecue, a far cry from last year’s Brownlow style best and fariest awards which I live streamed on my laptop! I had my photo taken with winner Tony Free and Matty Knights, hoisted up on their shoulders! The photo, taken in a tent, never turned out. What did however was my less exciting meeting with former player and assistant coach of some description Barry Rawlings. How is our body language?! But it does offer a better look at what was a very tired and run down Punt Road oval.

The metal pipe seating, the same industrial seating which also surrounded Arden St and parts of Preston’s Cramer St Oval, looks about as inviting as a trip to the dentist, and surely on a cold day, standing huddled with the masses provided a more comfortable experience. Below is a shot from the same day perched up in what I believe at the time was just named ‘the grandstand.’ 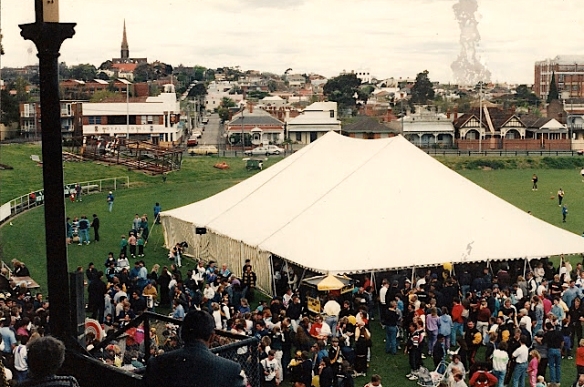 Again there’s a great view of Richmond the suburb. I love the ‘plush’ best and fairest venue, and what appears to be an old scoreboard lying on it’s face. I’m not sure of it’s origins as the old footy scoreboard was on the outer side of the ground, however these  team shots below at Punt Road definitely show a scoreboard, complete with cigarette advertising, at the Punt Rd end. I’d be interested if anyone knows more about this. 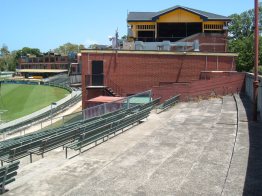 This is actually one of my favourite views of Punt Road, the back of the old grand stand. In my life time it’s been the dramatic back drop to news of sacked coaches, secret board meetings, and has even been the recipient of a pile of steaming chook poo! I just love the feel of the red bricks and make it a point to walk past it on my way over to see Richmond play at the MCG. It also now houses the Richmond Football Club museum which was originally in the bowells of the since demolished cricketers stand come social club. It’s open Mondays and match days at the G, so make sure you get along!

I’ve always loved this photo of Jack Dyer arriving at Punt Road oval with the local Richmond lads carrying their idol’s bags. It’s a great portrait of what football once was, accessible, local, even a tad tribal. To the right is a photo I took around 2006 of the same spot where Captain Blood entered Yarra Park. The above structure has since been demolished save for a sceric of old standing room which I’m most thankful has been kept.

The since demolised entrance gates

And here is that little piece of yesteryear which still stands today. No more than 50 or so patrons could have squeezed into this tiny bit of standing room, but it looks like it would have been a great spot to watch the footy from. I took a panorama shot from up there so I could let my imagination run away with itself!

It’s time to turn our attention to what is now named the Jack Dyer stand, the ‘main attraction’ if you like. Although in the midst of having coaches boxes installed and thus reducing it’s capacity, it’s one of those classic footy grandstands that feels much bigger when you’re in it than when looking at it. My nana used to talk about sitting in it with her cousins nd how they’d stamp their feet on the wooden boards each time a goal was kicked. Below is actually a shot from the last VFL match to be played at the ground bewteen Coburg and Williamstown in 2005. It was a sodden day and this was the entire crowd, but it does look nice to have Jack’s stand full of Tiger supporters. Can you spot David Cloke keeping a close eye on however many Clokes were playing that day?

It’s a ‘classic’ grandstand, and a feature that I love is the side glass windows. I’m not sure what it is about these but I love them. Perhaps it’s the feeling of being ensconsed by the stand, protected from a wintery Melbourne day.

Whilst I completely understand that the footy club needed to revamp and expand the playing surface (a great thing for the club) it has made a bit of a mess of the natural contours the ground had going for it. I eagerly await the finished product.

A little gem which I discovered in one of the narrow gaps I often find myself in whilst exploring a football ground was this ‘Gin Bar’ sign which was on the side of the old grand stand. With the wall in front of it since removed it is now easily seen, and worth having a look at for a glimpse of the past.

It would be remis of me not to mention and photographically demonstrate Punt Road’s location in relation to the mighty MCG. This will be the Tigers 50th season at the ‘G, having shifted it’s home games there in 1965, a masterstroke. The club’s most successful period came on the back of the move, and while progress can at times be hard for the footy fan to accept, premierships help. 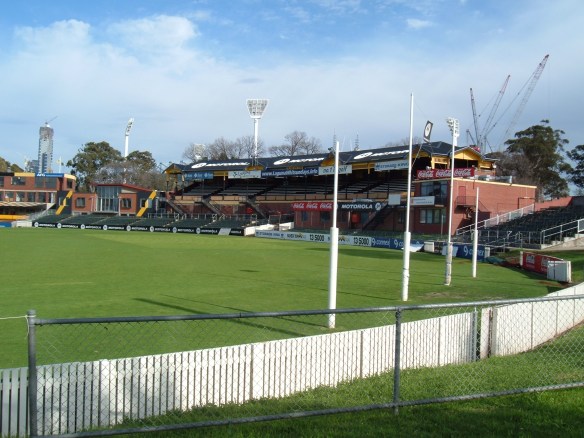 Which brings me finally to the cricketers stand-come-social club, where my dad did some of his finest camera work back in the 1960’s. This old building intrigued me greatly; from some angles it still looked like an old grandstand, from others it looked like a rundown block of flats. On venturing into the old museum that was tucked away in there you really got a sense of being in the bowels of a grandstand, a wonderfully authentic location for a football museum. I sneakily souveneered a brick when this building was demolished, something which seems silly yet I treasure it. 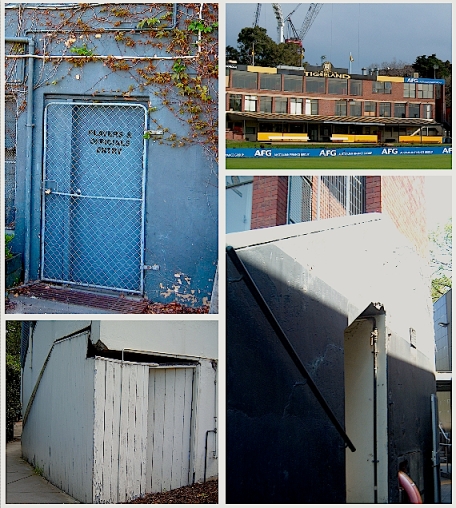 The rundown old footy ground I first ‘met’ in 1989 is no longer that. With a new surface and elite training and social facilities, the ground would be unrecognisable if it weren’t for the old grandstand keeping things rooted in the past. I’m very much looking forward to seeing the ground in use again for the Richmond VFL team, and the seniors practise match against Essendon sure has great lot of novelty factor. I only wish I could have gone! 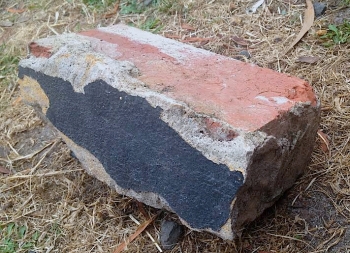 The fact that fans can still use the social club on game day, get off at Richmond station and walk past the ground on the way into the ‘G makes us very lucky when you consider what has been lost in the modern game. Richmond essentially still plays in Richmond, and Punt Road is very much our home, though it was one of the first league grounds to bite the dust. I’m glad she’s being looked after…now let’s start working on her trophy cabinet.