I’m stood there, arms joyfully around a stranger, with a heaving mass of humanity, bouncing as if in a mosh-pit, around me. There’s singing and chanting and ‘good-natured’ taunts to opposition supporters as the Tiger fans mark their territory. In the modern game where home grounds are shared, there’s one postage-stamp sized tribal patch left… the Punt Road End. Even the clubs best known online forum, puntroadend.com carries this name, such is it’s significance to the Richmond faithful.

Sure, our celebrations were way over the top for a home and away clash, beating Essendon in the Dreamtime at the G clash. But much like a dog waits for the scraps to fall from the table, we pounce on anything and everything there is to celebrate. We are in football supporters in starvation mode; enjoying the feast while it’s there to be enjoyed, because we might not eat for another six weeks.

Saturday night was something special. The standing room area was jam packed, which is always a sign of a big crowd, and the atmosphere was electric. I was wedged between the singing masses of Windy Hill and Punt Road, with the Dons mustering up some ‘high quality’ chants such as  “Ball…Ball…Ball…Ball…” every time Richmond fans cried for a holding the ball decision. And it went on.

The majority of supporters up the back however were Tigers, protecting the Punt Road End, our patch. Things were a bit testy between the two sets of supporters, but peace was maintained. Ten years ago, I doubt this would have been the case. As the game went on goal for goal, the tension built. More people seemed to be cramming into the standing room bays. My mate Gaz called me to see if I was at the game. I couldn’t hear him, and that was at quarter time. 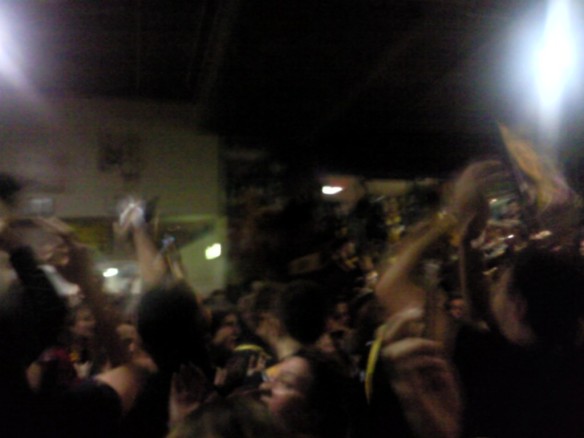 He finally found me and managed to insert himself into the crush, his first experience of standing at the footy. Whilst initially shell-shocked, he quickly grew fond. By nights end, he too was in the arms of strangers. One bloke in particular took a liking to him as he kept checking the ‘time-gone’ on his phone as we couldn’t see the clock at the ground. That’s what I like about standing at the footy, the surrounding people become your little community for a couple of hours at the footy. It’s a team effort.

Richmond fans are notoriously unconfident, and midway through the third quarter, with the contest still tight, a rare hush hung above us. Thoughts of  “Hey, we’re actually a chance here!” enter the psyche, and we realised we were going to have to emotionally invest in the next 45 minutes of game time. It was the calm before the storm.

IT was at this time that the Bomber fans, cocky and sure they were going to run over the top of us as has been done so often before, were beginning to fire up a little. This stirred the Tiger army into action. This is the Punt Road end, we own this spot-pipe down! Even if a team wins comfortably, it’s our job to make the supporters earn it. The Punt Road End crowd actually fires up other teams supporters in a way you rarely see. I even saw a Melbourne fan last year turning around and giving it to us as their team ran over the top of the Tiges in the last quarter. It was good to see.

Back to the game- and with the fans back in full voice, suddenly the boys responded. Back to back goals from Big Jack brought about a release in emotions. Then when cult figure Robin Nahas snuck one through to push the margin to three goals, the place went potty. When Jakey King banged one through, pandemonium! We’re going to win it!!!

Some wiser, more mature Tiger supporters realised that the young’uns down the front were getting a bit carried away. They’d seen it before. Don’t give it to the opposition yet. It’s still the third term. And they were right . . . the game was far from over.

Essendon came out strongly in the final term, with substitute Alwyn Davey kicking the first, and giving the Essendonians something to shout about. But the Tiger voices didn’t go missing now. This was battle. The Same-olds persistently pegged back the margin, even though we appeared to kick a steadier every now and then. Grown men were now pale with nerves, and my mate Gaz’s phone was getting a real work-out delivering the ‘time-gone’ to all and sundry from his AFL phone app (application for the uninitiated)!

The crowd figure went up on the screen- 83,000, which provided a momentary release from the tension of the game. We paused for a minute to reflect on just how big this club could be with some success.

But back to the game, and Jake King appeared to be running into an open goal. The roar of excitement was palpable! This would be the sealer, kicked by our battler, the bloke we know we’d hate if he played against us. He’s already kicked three, and is remarkably sitting in the league’s top-10 goal-kickers with 17 for the year.

But his tired legs stumbled. In desperation he handballed to the square, looking for a team-mate,  when suddenly  Dustin “Go-go Gadget” Fletcher stretched out a tired arm to intercept the ball. Now both sets of fans were screaming, Richmond fans cursing; heads in hands, while Bomber fans were relieved at the reprieve granted, and now with the chance to get uncomfortably close, at least from a Tiger point of view.

The play was tight and the crowd tighter. Suddenly, the MUCH maligned Tyrone Vickery gathered a loose ball at half forward. He dodged a tackler, left his opponent for dead, and calmly slotted his third, and more importantly, the sealer!

Mayhem! Drinks spilled everywhere, the crowd erupted as one! We gave it to the Essendon fans, but  more than that we just celebrated! We were home. Keeping your footing proved rather difficult amongst the flurry of humanity, but due to being packed in like sardines, the chance of actually falling was minimal.

“Twenty-six minutes gone!” called Gaz from his phone. The bloke behind him grabbed his head in a bear like hug, as if Gaz himself actually had something to do with the outcome of the match. I think Gaz was chuffed-I think Gaz will be back!

The siren sounded, setting off a rampage. The song was sung with gusto, the chanting and singing carried on for the next half hour or so until the police moved in to send everyone on their way. The singing momentarily moved outside to the concourse, before dispersing; everyone headed their separate ways into the night. The crisp air of Yarra park greeted me as I headed back to the car. But my night spent  protecting the Punt Road End, coupled with the sweetness of victory is all I needed to stay warm.